Dangerous toys are not a new problem. For decades, World Against Toys Causing Harm, Inc. (W.A.T.C.H.), founded by Attorney Edward M. Swartz, worked to make the world a safer place for children. However, marketing efforts by toy manufacturers often override safety concerns, resulting in thousands of avoidable toy-related injuries each year. Sadly, while many toys are safer, many well-known hazards, including chocking, strangulation, flammability, and eye injury, as displayed in the adjacent artifact cases, are still present in newly designed toys.

This “light-up power” bow and arrow set is sold with three “screaming whistle” arrows which are marketed as being able to fly “up to 145 ft!” Remarkably, among the many warnings for children is an instruction that arrows not be pulled back “more than half strength” and that the “fire glow” illuminated arrows and bow, designed for “night or day,” are “[n]ot for play in complete darkness.”

The figurines in this Little People Play Family School Bus are similar to the one Iain Cunningham choked on in 1971. Fisher Price had been aware of the choking hazard since 1965, and the company’s president admitted under oath that no tests had been run to see if the toys could be swallowed or choked on. But it was 16 years before the Cunninghams received a multi-million-dollar settlement in the case, and another four before Fisher Price made the figurines bigger and safer. Even then, the company claimed the toys were safe. ''We feel that the limited number of injuries associated with these products—which are in wide distribution—can be attributed to no more than coincidence,'' a Fisher Price spokesperson said. 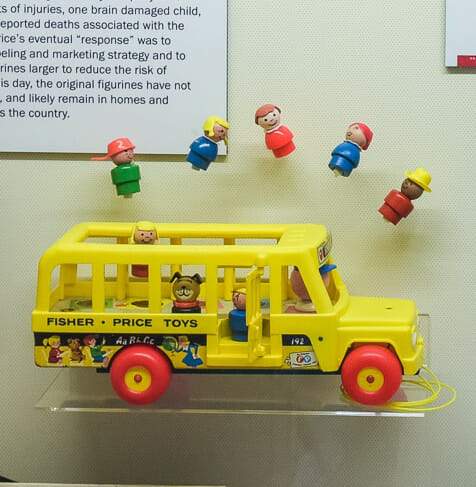 To understand the impact Edward M. Swartz (1934–2010) had on America’s children, listen to Ralph Nader: "He basically pioneered the whole area of toy safety," said Nader. "He documented toy hazards, he litigated and advocated for toy safety in the halls of Congress, before government agencies, and through massive public education campaigns."

Attorney Swartz launched his career as a national spokesperson for toy safety with his 1971 book, Toys That Don’t Care. Later he founded World Against Toys Causing Harm, Inc. (W.A.T.C.H.) and began publishing his annual list of “10 Worst Toys,” which helped make him a national media fixture and extended his influence beyond the courtroom.

Swartz’s dedication to his clients, child safety, and courtroom excellence was legendary. Attorney James Swartz, Ed’s son said: “He put his entire heart and soul into it.’’ Edward M. Swartz once said: “A little piece of me has been left on the courtroom floor of every case I ever tried.”