Stella Liebeck, the 79-year-old woman who was severely burned by McDonald’s coffee that she spilled in her lap in 1992, was unfairly held up as an example of frivolous litigation in the public eye. But the facts of the case tell a very different story. The coffee that burned Stella Liebeck was dangerously hot—hot enough to cause third-degree burns, even through clothes, in three seconds. Liebeck endured third-degree burns over 16 percent of her body, including her inner thighs and genitals—the skin was burned away to the layers of muscle and fatty tissue. She had to be hospitalized for eight days, and she required skin grafts and other treatment. Her recovery lasted two years.

Liebeck offered to settle the case for $20,000, but the company refused. McDonald’s offered Liebeck only $800—which did not even cover her medical expenses. When the case went to trial, the jurors saw graphic photos of Liebeck’s burns. They heard experts testify about how hot coffee should be and that McDonald’s coffee was 30 to 40 degrees hotter than coffee served by other companies. The jury learned that 700 other people—including children—had been burned before, yet the company did not change its policy of keeping coffee at between 180 and 190 degrees. The company knew its coffee was causing serious burns, but it decided that, with billions of cups served annually, this number of burns was not significant.

The goal of the lawsuit was to try to right a wrong. “We knew, before the lawsuit was filed, that the temperature of the water was 190 degrees or so, and the franchise documents required that of the franchisee,” said Kenneth Wagner, an Albuquerque lawyer who represented Liebeck. Most home coffee makers produce coffee that is between 135 and 150 degrees, he added. 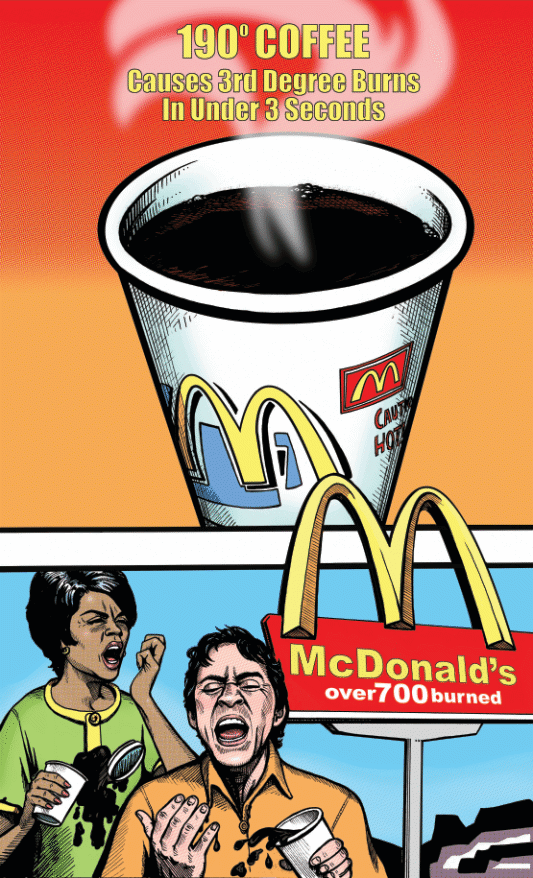 Myth: This was a case of a greedy claimant looking for a deep pocket.

Reality: Mrs. Liebeck spent six months attempting to convince McDonald's to pay $15,000 to $20,000 to cover her medical expenses. McDonald's responded with a letter offering $800. Mrs. Liebeck also asked McDonald's to consider changing the excessive temperature of its coffee so others would not be similarly harmed.

Myth: McDonald's was unfairly punished for serving hot coffee because everyone knows that hot coffee can cause burns.

Reality: People did not realize how seriously they could be burned. All McDonald's restaurants served coffee between 180 and 190 degrees. At this temperature, spilled coffee causes third degree burns in less than three seconds. Other restaurants served coffee at 160 degrees, which takes twenty seconds to cause third degree burns. That is usually enough time to wipe away the coffee.

Coffee that other restaurants serve at 160 degrees can also cause third-degree burns, but it takes 20 seconds, which usually gives the person enough time to wipe away the coffee before that happens.

“Our position was that the product was unreasonably dangerous, and the temperature should have been lower,” Wagner said.

The jurors awarded Liebeck $200,000 in compensatory damages for her pain, suffering, and medical costs, but those damages were reduced to $160,000 because they found her 20 percent responsible. They awarded $2.7 million in punitive damages. That amounted to about two days of revenue for McDonald’s coffee sales. The trial judge reduced the punitive damages to $480,000, while noting that McDonald’s behavior had been “willful, wanton, and reckless.” The parties later settled for a confidential amount. According to news accounts, this amount was less than $500,000.

Liebeck’s case got picked up by the media, and the story that got relayed was sometimes distilled to little more than: A woman made $2.7 million by spilling coffee on herself. The case became a punch line for late-night comedians and on Seinfeld.

Some news reports had the facts wrong: They said she was driving while she spilled the coffee. In reality, her grandson was driving, with Liebeck in the passenger seat. They bought the coffee in the drive-through window and then parked the car. While parked, Liebeck put the coffee cup between her knees and removed the lid to add cream and sugar, and she spilled it. She was wearing sweatpants, which held the scalding liquid against her skin.

Consumer advocates say the distorted narrative picked up speed because business interests and some lawmakers used it as a way to create a public belief that frivolous lawsuits were common and that jury verdicts were running amok, all in an effort to advance a tort reform agenda that limits consumers’ ability to hold wrongdoers accountable.

In 2011, trial lawyer Susan Saladoff made a documentary, “Hot Coffee,” that exposed the true story and corrected some of the public perception of the case. (“Hot Coffee” is available in the museum’s gift shop.) But even after that, the myth of “the woman who got rich after abusing the court system over spilled coffee” persisted.

Liebeck’s attorney Kenneth Wagner said Liebeck was concerned about the number of other people who had been burned by McDonald’s coffee—and that the number included children. States’ products liability laws contain instructions about warnings: They must be in a conspicuous place and must warn the product’s user of possibly dangerous features, Wagner said. “All the cup said was ‘contents hot,’” but that isn’t enough, Wagner noted—the warning should say how hot it is and that it could cause serious burns.

Liebeck’s story, like many personal injury lawsuits, got started because of one person’s injuries but revealed a larger pattern of corporate behavior that put consumers at unreasonable risk.

explore some of our exhibits